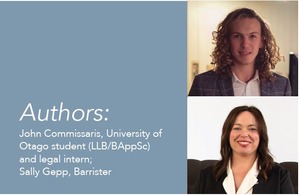 Initiatives to increase Tāmaki Makaurau’s shipping capacity to match local and national population growth have not lacked contention. Reclamation efforts in particular have captivated public interest, whilst seabed dredging proposals, and associated sediment dumping, to maintain (maintenance dredging) or deepen (capital dredging) existing shipping channels to cater for larger ships, have been no less polarising. Groups such as Protect Aotea have been particularly vocal in advocating for ecological and mana whenua concerns, while Ports of Auckland Ltd (POAL) has suggested many of these concerns are overstated.

In 2020, POAL separately applied for resource consents to conduct both maintenance and capital dredging inside the  CMA. The consents were granted by Auckland Council and appealed to the Environment Court by Protect Aotea and Protect our Gulf. In a preliminary decision, the Environment Court found that the effects of dumping material outside the CMA had a sufficient nexus to, and were thus within the scope of, the actual/potential effects on the environment of allowing the dredging activities. However, as there was a “sufficient” consent under a comparable consenting regime or the dumping activity, this precluded any competing assessment of those matters by a consent authority under the Resource Management Act 1991, and POAL’s marine dumping consent formed part of the existing environment (Protect Aotea v Auckland Council [2021] NZEnvC 140 at [87]-[88]). Protect Aotea appealed this decision to the High Court. POAL cross-appealed.

In a decision that provides useful analysis of the relationship between the Resource Management Act 1991 and other legislative regimes, and of the distinction between the existing environment and permitted baseline concepts, the High Court (Gault J) dismissed the appeal and cross appeal, finding that the Environment Court did not err in deciding that the dumping and its effects are relevant to the proposed dredging activities, being connected and proximate to them, nor in deciding that POAL’s marine dumping consent forms part of the existing environment (Protect Aotea v Auckland Council [2022] NZHC 1428 at [124]-[125]).