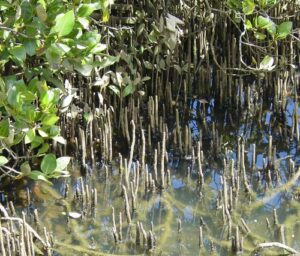 The Environment Court issued a declaration that the Freshwater Standards apply to the CMA only to the extent that they cover the area of CMA upstream of the “river mouth” as defined in the RMA, and do not apply to the general CMA, open oceans, estuaries, bays and other areas not falling within the definition of “river or connected area”.[1] That declaration was appealed to the High Court.

Under the Freshwater Standards “natural wetland” has the meaning given by the National Policy Statement for Freshwater Management 2020 (NPS-FM), which uses the definition of “wetland” in the RMA subject to three exclusions. The RMA says a wetland “includes permanently or intermittently wet areas, shallow water, and land water margins that support a natural ecosystem of plants and animals that are adapted to wet conditions”. The RMA definitions of “water”, “coastal water”, and CMA are also relevant.

[61]        It follows from these definitions that, under the RMA, a wetland includes areas that are wet (permanently or intermittently) from seawater, shallow seawater, and land seawater margins (if they support a natural ecosystem of plants and animals that are adapted to wet conditions). Any such wetland on the seaward side of the line of mean high water springs (or the alternative line in a river) is within the CMA.

[66]        If the drafters of the Freshwater Standards had wished to exclude from “natural wetland” any wetland located in the CMA, the Freshwater Policy Statement had just the term for the job:

While the Court accepted that the Freshwater Standards were introduced with the NPS-FM as part of a “freshwater package”, at [103] the Court considered that the adoption of the different definitions strongly indicates that the two documents have (in part) a different scope.

The Court observed at [102] that while a NES may implement policies and objectives in a NPS, there is nothing in the Freshwater Standards to indicate that they were implementing only the NPS and they could also be implementing the NZCPS (noting that NZCPS policies 11 and 13 protect wetlands, including coastal wetlands).

The Court concluded at [124] that the Environment Court’s finding that the Freshwater Standards use “river or connected area” as a clear and convenient demarcation point for their application was an error.

The High Court quashed the declarations made by the Environment Court and made a declaration that:

Sarah was counsel for Patuharakeke Te Iwi Trust Board in the Environment Court declaration proceedings.