Home News RMA to be repealed and replaced 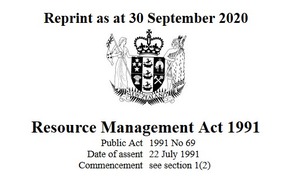 RMA to be repealed and replaced

The Government is delivering on its promise to reform the Resource Management system based on the comprehensive review carried out last year.

The three new Acts will be the:

Other key changes include stronger national direction and one single combined plan per region. And there will be more focus on natural environmental outcomes and less on subjective amenity matters that favour the status quo. Better urban design will be pursued.

The reform follows the review of New Zealand’s resource management system led by former Appeal Court Judge Tony Randerson and published in July 2020. Reform has been called for over the last decade, including by the Productivity Commission, the Waitangi Tribunal, LGNZ, EDS, the Property Council, Infrastructure NZ and the Northern EMA.

Under the NBA there will be a mandatory set of national policies and standards to support the natural environmental limits, outcomes and targets specified in the new law. These will be incorporated into combined regional plans prepared by local and central government and mana whenua.

“The existing 100-plus RMA council planning documents will be reduced to about 14.”

The CAA responding to the effects of climate change will be progressed by Climate Change Minister James Shaw.

David Parker said the National and Built Environments Act, as the core piece of legislation replacing the RMA, will be progressed first.

The Government is working with a collective of pan Māori entities on key elements of the NBA including the strengthened recognition of tikanga Māori and Te Tiriti o Waitangi. Continued engagement with local government will also be crucial.

More information about the reform is available here