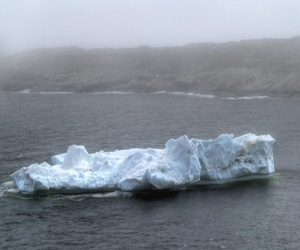 Antarctic ice sheets are capable of widespread melting, raising sea-levels up to 20 metres under current atmospheric carbon dioxide levels, according to a new Victoria University of Wellington-led study published in Nature.

The research shows up to one-third of Antarctica’s ice sheets melted during the Pliocene epoch around three million years ago, causing sea-levels to rise as much as 25 metres above present levels. Levels of carbon dioxide in the Earth’s atmosphere were similar to today’s levels, and in response, the temperature was two to three degrees Celsius warmer.

The study was led by Dr Georgia Grant, a recent Victoria University of Wellington PhD graduate now at GNS Science, and used a new method of analysing marine geological sediments to construct a global sea-level record.

Dr Grant developed the new method of determining the magnitude of sea-level change through analysing the size of particles moved by waves, as part of her PhD research. The method was applied to the geological archive from Whanganui Basin on the west coast of New Zealand’s North Island, which contains some of the best evidence anywhere in the world for global sea-level changes.

Dr Grant was able to show that during the past warm period of the Pliocene about three million years ago, global sea levels regularly fluctuated between 5 to 25 metres.

Read the full article as published in Nature