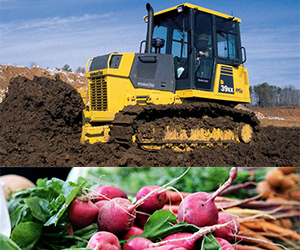 Avoiding urban encroachment and protecting land with value for food production were matters of national importance in the RMA’s predecessor, the Town and Country Planning Act 1977. These matters were not carried through to the RMA 1991 which research shows has had an adverse impact on productive soils.

The current planning regime does not require consideration of the overall food system in NZ, nor does it direct how land use decisions at a district or regional level affect food production and availability of supply at both the local and national level.

As RMLA members will be aware Councils are also already dealing with many competing priorities and directions in other national policy documents. The research underpinning some of the findings in MfE’s Our Land 2018 report has led to increasing calls for an NPS to protect the availability of valuable soils for current and future food production.

Versatile soils are a natural asset, the management of which is essential for meeting the nutritional demands of our existing population, and for meeting the needs of future generations who will be operating in a low emissions economy with a changing climate. While ‘food security’ is not something we generally identify as a risk in NZ, it could potentially become a more prevalent issue in the future.

An important part of any new NPS relating to productive land will be the definition of methods for identifying what are the highly productive soils that should be protected. This in itself may be difficult as the Land Use Capability (LUC) system that many councils rely on has some limitations in identifying land suitable for food production. There are a wide range of other factors which can also influence suitability of soils for production such as climate, availability of water, and access to transport (as has been previously identified in Environment Court case law).

As well as guidance on identification of productive land, the new NPS could also provide high level guidance around the need to protect versatile soils for food production and direct territorial authorities to restrict development and inappropriate subdivision and activities on this land while encouraging its productive use.

Some Regional Policy Statements and plans do include strong directions to protect productive land, however this policy is not always reflected at district plan level where rules have not always been included to ensure these policy outcomes are met.

Many of NZ’s towns and cities were originally settled because of their proximity to productive soils which were used to feed the local population. As these urban centres have expanded, many communities have built over the adjoining soil resource. As a result, these communities may become increasingly become reliant on productive areas located further away and on imports for food supply. Clearly this will raise tensions with the NPS for Urban Development Capacity.

Lifestyle blocks and rural residential subdivision are another activity which has caused land fragmentation issues in NZ.  While the NPS will likely contain clear guidance around avoiding fragmentation of versatile soils, historical fragmentation issues already present in many districts are difficult to address retrospectively.

Where there is fragmentation and urban expansion into productive areas there are reverse sensitivity effects that can be extremely detrimental to maximising productive land use. The NPS may therefore need to give direction to territorial authorities around how to manage and avoid reverse sensitivity on productive land within rural zones and at the zone interfaces. Methods might include requirements for setbacks and design controls on new urban developments.

In future the value of our best soils as a resource for food production both for NZ and export is likely to be increasingly recognised in RMA policy. The first phase of the MfE’s work programme on soils may begin to provide some direction in regard to this finite resource and on managing the conflicts with all of the other competing interests that need to be taken into account.

This article was written by Astra Foster, Advisor- Natural Resources and Environment at Horticulture NZ. Astra is a member of the RMLA Rural/primary sector knowledge hub.