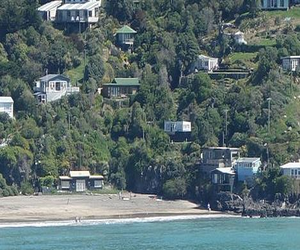 Most baches at Taylors Mistake, Hobsons Bay and Boulder Bay will be able to stay after the Christchurch City Council accepted a Hearings Panel recommendation.

Baches have existed on this stretch of coastline for more than 100 years. They are all on publicly owned legal road, which guarantees public access to the coast.

The baches were previously licenced to occupy the unformed road, but the last licences expired in 1986. Since then successive Councils have grappled with the question of what to do about the baches.

Councillor Sara Templeton, who chaired the Hearings Panel set up to consider the future of the baches, says submissions received during consultation were helpful.

“There was a real focus on the heritage and character of the baches,” she says. “We lost so many of our heritage buildings in the 2011 earthquake, and most submitters were keen for us to consider the heritage value of the baches.”