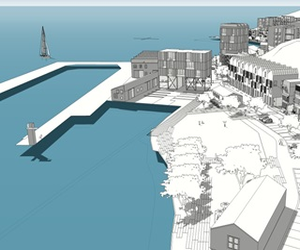 Wellington City Councillors have voted in favour of the sale and lease of land at Shelly Bay.

This removes one of the last hurdles to the project which will see a new 350-home development on the former Defence site which will also include a boutique hotel with about 50 rooms, 280 apartments, 58 townhouses and 14 standalone houses.

The project is a partnership between the Council and Shelly Bay Limited (SBL), a company set up by property developer The Wellington Company and Taranaki Whānui /Port Nicholson Block Settlement Trust (PNBST).

A further 0.6 hectares of land and two buildings will be leased for 125-years to SBL for commercial, mixed-used development which will be generally publicly accessible; this lease is valued at about $5.5 million.

Key areas of concern raised by submitter’s included traffic congestion, how the development integrated with wider Council strategies and the development of the peninsula as a whole, the costs of infrastructure, the consenting process and use of the Housing Accords and Special Housing Areas Act 2013 (HASHAA) and environmental concerns.

Read the changes and amendments included in the decision