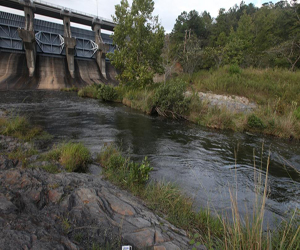 Many fish species, including some that used to be widespread, are now absent from many of the streams they used to occupy. Local extinction is often the result of several threats operating together.

This first set of national guidelines for fish passage should help improve the prospects for our freshwater fish,

New Zealand has around 40 native freshwater fish, and several sports fish. Around 70% of our native fish are threatened or at risk.

If fish movement is delayed or blocked completely, they may be unable to reach critical habitats for completing their lifecycle. As a result their numbers can be reduced, or they may be lost from a stream completely.

DOC and regional councils have specific responsibilities to manage fish passage in our waterways under the Freshwater Fisheries Regulations 1983 and Resource Management Act 1991 (RMA) respectively.

Under the RMA, regional councils control environmental effects relating to the construction of structures. Rules implemented in regional plans include consideration of fish passage and protection of areas of significant habitats for indigenous fauna.

New Zealand fish passage guidelines provide the recommended practice for the design of instream infrastructure to provide for fish passage. They set the foundation for improved fish passage management in New Zealand.