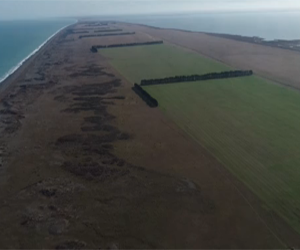 Forest & Bird has made an application to the Environment Court for enforcement orders, after a farmer near Christchurch damaged or killed nearly 30% of the national population of an extremely rare and threatened plant, Muehlenbeckia astonii (shrubby tororaro).

The vast majority of shrubby tororaro exists on a single farm on Kaitorete Spit, a narrow stretch of ecologically significant land between Lake Ellesmere and the sea. Recently, a new owner of that farm sprayed and cultivated three of the farm’s eight paddocks.

Muehlenbeckia astonii, which has small bright-green heart-shaped leaves, is a popular landscaping plant but extremely rare in the wild.

According to Forest & Bird ecological evidence, the clearance and sowing of oats damaged or destroyed an estimated 29.3% of the total nationwide wild population.

Forest & Bird has applied to the Environment Court to prevent further destruction, and to require rehabilitation of the area. Much of the rest of the national population of Muehlenbeckia astonii exists on the farm’s other paddocks.

Water consents for the area have also been sought from Environment Canterbury. Forest & Bird has asked that those irrigation consents be publicly notified.

Forest & Bird is also concerned about a Christchurch District Plan rule, which allows clearance of indigenous vegetation in “improved pasture”. The destruction of the Muehlenbeckia astonii is claimed to have been carried out under this rule, which was considered at District Plan hearings in 2016.

Due to this uncertainty, Forest & Bird has also sought declarations regarding the improved pasture rule and definition, including that the rule is so uncertain that it could be unenforceable.

Forest & Bird says this is only one example of many in the Christchurch district where there are threatened plants living on land that has been grazed.

The Statistics New Zealand Our land report stated that lowland and coastal environments are our most threatened and worst protected areas, particularly on the east of the South Island.