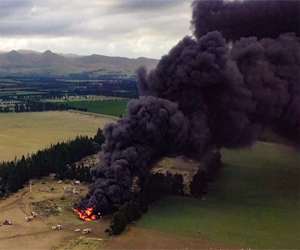 Environment Canterbury is working with Hurunui District Council and Fire and Emergency New Zealand (FENZ) to coordinate the clean-up, following a tyre stockpile fire in Amberley on 26-27 February 2018.

Work is now underway to remediate the property by removing contaminants that were left from the fire, after a stockpile of more than 120,000 tyres  at the North Canterbury property went up in flames.

Environment Canterbury had begun Environment Court action against Tyre Recycling Services New Zealand Limited and 2016 Tyre Shredding Limited in December 2017, in an attempt to have the tyre pile removed.

On April 24 2018, the Court issued enforcement orders on the two companies, directing  them to remove the tyres by 31 December 2018.

The orders provide for a staged removal, with certain quantities to be removed by specified dates, as well as ensuring the tyres closest to the tree lines are removed first, which will help remove the risk to the environment.