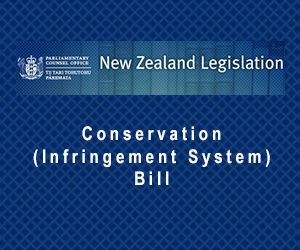 The Conservation (Infringement System) Amendment Bill updates eight separate Acts (see below) to allow the Department of Conservation to issue infringement notices instead of prosecuting for minor offences.

The bill was introduced under the previous National Government. Currently all conservation offences under the Acts and regulations have to be dealt with either as a formal warning or through the courts.

According to Conservation Minister Eugenie Sage, the bill has been drafted in order to allow Department of Conservation staff to issue infringement notices and reduce the number of costly prosecutions. By doing so, serious offences such as using a firearm unsafely or harming threatened species will not be given infringement notices but will be prosecuted.  “Someone who fishes in a marine reserve inadvertently, and does not catch any fish or do any harm, may now get an infringement notice.  Someone who deliberately flouts the rules, and poaches fish is still likely to end up in court”, she explains.

“These changes bring DOC’s powers in line with how low level offences are dealt with in fisheries management, biosecurity, dog control, resource management, traffic and parking”, she added.

The Bill has been referred to the Environment Select Committee for consideration and public submissions.