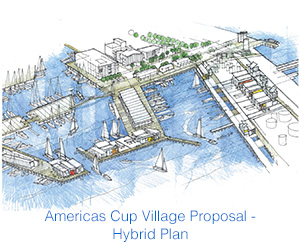 The Government and Auckland Council have this week released plans for a world class America’s Cup village on Auckland’s waterfront to host the 2020-21 cup defence.

It provides for at least seven syndicate bases around two basins in the Wynyard area with provision for restaurants and bars, public viewing, and hospitality areas.

The proposal incorporates elements of the Wynyard Basin option, agreed by the council in December and publicly notified last month, and the Wynyard Point variant explored by the Government.

The Auckland Council and the Government are cooperating on all aspects of the “hybrid’ proposal including consents, which can be achieved in a similar time frame to the notified option.

Crucial to the revised village plan were negotiations between officials and Dutch company Stolthaven Terminals that will see it vacate its southern tank farm site on Wynyard Point.

That has cleared the way for more land-based locations and reduced the need to build out into the harbour.

Economic Development Minister David Parker says the proposal is a win-win-win for all parties, reducing costs and environmental impact while offering an excellent venue for the defence.

Costs have increased across all options but the relative cost of this proposal is expected to be $15 million to $20 million less than the Basin option before putting a value on the harbour intrusion, which had also been significantly reduced.

It could have been possible to have a smaller extension of Halsey Wharf, but the Government is prepared to compromise to provide – and exceed – the number of double bases requested by Emirates Team New Zealand, Mr Parker says.

As part of the plan ETNZ will be granted the prime spot at the end of Hobson Wharf in a development worth $30 million.

Prime Minister Jacinda Ardern, Mr Parker and Auckland Mayor Phil Goff have all expressed their wish to minimise the intrusion into the harbour, alongside providing a first class location, and the plan delivers on that.

By reducing the proposed extension of Halsey Wharf from 75 metres to 35 metres and altering the layout the proposal restores important sight lines lost under the prior plan.

Auckland Mayor Phil Goff said he was pleased the Council and the Government had worked collaboratively to reach a consensus.

The proposal offers the added advantage of bringing forward the redevelopment of Wynyard Point in line with the Auckland Council’s longer term plans.

Mr Parker said the plan provides flexibility to make changes to the layout of bases on Wynyard Point if ETNZ had further concerns and was willing to engage in further discussions on those.

Mr Goff has discussed the Wynyard hybrid option with Auckland’s councillors and it will go before council’s governing body in the near future.

Agreement has not yet been reached with ETNZ on the hosting agreement and the location.

The plans can be viewed at:  http://www.mbie.govt.nz/info-services/infrastructure-growth/americas-cup