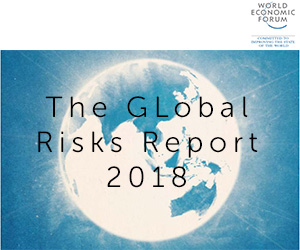 The World Economic Forum’s latest risk survey notes that environmental issues are now some of the highest risks for New Zealand.

According to the World Economic Forum’s (WEF) latest Global Risks Report, when it comes to global risks of highest concern for doing business in New Zealand natural catastrophes are at the top of the list, followed by extreme weather events.

Water crises and failure of climate change mitigation and adaptation rank as the 7th and 8th highest risks respectively to doing business in New Zealand.

According to the WEF, New Zealand’s main risks include:

The World Economic Forum has been producing Global Risk reports for more than a decade by surveying 1000 business leaders in the Forum’s network.

Surveys in recent years record that environmental risks have grown in prominence.

“… all five risks in the survey’s environmental category rank higher than average for both likelihood and impact over a 10-year horizon. This follows a year characterized by high-impact hurricanes, extreme temperatures and the first rise in CO2 emissions for four years. We have been pushing our planet to the brink and the damage is becoming increasingly clear. Biodiversity is being lost at mass-extinction rates, agricultural systems are under strain and pollution of the air and sea has become an increasingly pressing threat to human health. A trend towards nation-state unilateralism may make it more difficult to sustain the long-term, multilateral responses that are required to counter global warming and the degradation of the global environment.”