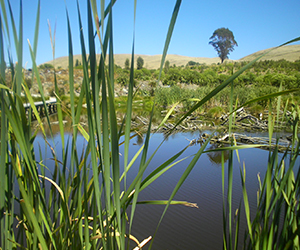 Conservation Minister Eugenie Sage is calling for immediate measures to protect the last vestiges of New Zealand’s wetlands. Large areas of Canterbury, Manawatu, Waikato and the Bay of Plenty historically once boasted extensive freshwater wetlands; today, only 10% remain. In Southland alone, more than 1000 ha of wetlands have been lost since 2007.

The Minister released the eighth national report under the Ramsar Convention on Wetlands of International Importance.

“It will take a concerted and serious effort and years to change this trend. Our wetlands are the land’s kidneys capturing sediments and nutrients and slowly releasing water in drought prone areas. They are home to precious wildlife and plants and are wonderful places for people to experience nature,” Ms Sage said. “We must protect the last 10%”, she added.

Rare and threatened species that rely on New Zealand’s remaining wetlands include the Australasian Bittern/matuku, Canterbury mudfish (our most threatened mudfish species) and Corybas carsei (Swamp helmet orchid) – which now has only one population remaining, at the Whangamarino Wetlands near Te Kauwhata in northern Waikato.

“There are instances of great wetlands management and restoration activities carried out by the Department of Conservation, local authorities, community and non-governmental groups, iwi, Fish & Game, private landowners, and commercial partners.

“But we need to do much more. I want to see more Ramsar sites, and DOC is investigating options. There needs to be more replanting of wetlands and better use of the Resource Management Act to ensure they are considered when intensive developments and agricultural expansions are being considered”, said Ms Sage, noting “the Government will do more and continue to support for communities working hard to achieve long-term wetland conservation”.

The Ramsar Convention was established in 1971 and includes 169 countries. In total there are 2,293 Ramsar sites.

The NZ Government became a signatory to the Convention in 1976, and currently has six Ramsar sites, these are:

DOC has freshwater programmes such as Arawai Kakariki and Living Water funding wetland management at its Ramsar sites and is currently investigating the potential for future Ramsar wetlands.

*A report published by Environment Southland (2016) confirmed that over 1200 ha of wetlands were lost between 2007 and 2015 in southland, equivalent to a 10% loss in the Southland study area since 2007. The National Report also reports several key findings on the condition of fresh water and coastal habitats and ecosystems in New Zealand as set out in the Our fresh water 2017 and Our marine environment 2016 reports (released under the New Zealand Environmental Reporting Act 2015).