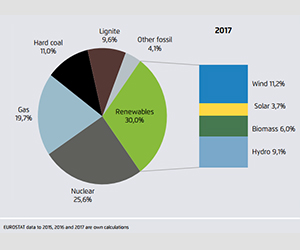 Renewable energy generation from wind, solar and biomass, have surpassed coal generation for the first time in the EU, according to the latest figures for 2017.

A report titled The European Power Sector in 2017 by think tanks Sandbag and Agora Energiewende, which analysed data from the EU’s official statistics agency EUROSTAT, concludes that wind, solar and biomass have lead a renewable energy sector spike in power generation.

In 2016, these three renewable technologies, excluding large hydro, provided 18.8 percent of the EU’s electricity, while coal provided 21.5 percent. In 2017, this figure increased to 20.9 percent compared to 20.6 percent for coal. The report authors say the figures are explained by strong growth in capacity combined with the closure of coal plants in Western Europe.

In 2017, renewables generated 30% of Europe’s elec­tricity for the first time. Wind, solar and biomass grew to 20.9% of the EU electricity mix. This is up from just 9.7% in 2010, and represents an average growth of 1.7 percentage points per year. According to the report’s authors, if this rate continued, then it is sufficient for total renewables to hit 50% of the EU electricity mix by 2030 and 27% share in the EU’s final energy demand.

Given this, say the authors it is easy to envisage how renewable energy deployment could be sped up to achieve the 35% renewable target that is currently under negotiation.

Dave Jones, Energy Analyst at Sandbag, commented that retiring coal plants is the single biggest difference any country can make towards transitioning to a low-carbon economy: “We forecast Europe’s 258 operational coal plants last year emitted 15% of total EU greenhouse gases. In 2017, Netherlands, Italy and Portugal added their names to the list of countries to phase-out coal, which is great progress. We need a fast and complete coal phase-out in Europe.”

Five years ago, coal generation was twice that of wind, solar and biomass. The shift in balance has been largely due to the decision to phase out coal in five of the EU’s larger economies.