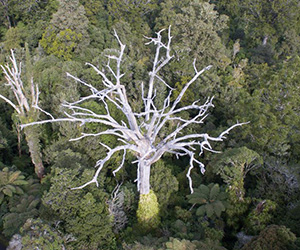 Three measures to address kauri dieback disease were introduced this week by the Kauri Dieback Governance Group when they met on Wednesday.

It was agreed to put in place:

“These new measures will give greater protection to kauri. They are targeted at getting people to do the right thing and will strengthen efforts to manage the spread of kauri dieback,” says Roger Smith, the Ministry for Primary Industries’ chief operations officer, who chairs the governance group.

The first measure the programme’s partner agencies agreed on is putting in place a Controlled Area Notice (CAN) for kauri dieback under the Biosecurity Act 1993.

The CAN cannot ban people from going into a particular area but it would put a legal requirement on them to follow the right hygiene standards when entering or leaving areas that have kauri. “We aim to make these safeguards as easy as possible to follow,” says Mr Smith.

The Group aims to have the CAN in place over the coming months and that it will be rolled out in stages in order to target higher priority areas first. It also provides opportunities to learn and refine the controls as they are rolled-out to other places.

Work on preparing the CAN is now underway and programme partners are deciding the details of how it will be implemented. This will include deciding the first location where the CAN will initially apply.

The second measure programme partners agreed was that the CAN should ultimately be replaced by a National Pest Management Plan (NPMP) for kauri dieback.

“A national plan is used for tackling major biosecurity threats and is the strongest form of regulation we can put in place. It will provide consistent regulations for dealing with kauri dieback that apply nationally, more robust programme governance and better access to funding,” says Mr Smith.

“The national plan would be a longer-term measure for managing kauri dieback and extensive consultation will be required to develop it.”

The third measure agreed was to set up a Strategic Science Advisory Group to ensure the fight against kauri dieback is supported by the necessary science and research.

Kauri dieback is found in the upper North Island and can kill kauri of all ages. It is a disease caused by a microscopic fungus-like organism called Phytophthora agathidicida. It lives in the soil and infects kauri roots, damaging the tissues that carry nutrients and water within the tree, effectively starving it to death. Soil disturbance from human activity like people using unofficial tracks or not cleaning footwear is one of the main ways spores can be spread.