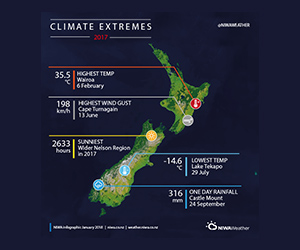 Niwa’s Annual Climate Summary, published on Tuesday has prompted renewed calls from LGNZ’s president Dave Cull for a consistent standard of climate risk management to be rolled out across the country, to ensure that local government bodies are fully cognitive of the climate risks New Zealand faces.

Similarly, Climate Change Minister James Shaw noted that NIWA’s annual climate summary for 2017 “sends a clear message that New Zealand is right to be addressing the impacts and risks of climate change”.

NIWA’s data ranks 2017 as the 5th warmest year on record since the Institute began annual measurements in 1909. Seven of the warmest ten years since 1909 have been in the last decade.

“NIWA’s latest data is in line with patterns of climate change that are becoming clearer every year, and shows why we have a responsibility to…limit more climate change and prepare for the effects the changing climate is already having,” said Mr Shaw.

While 2017 was the 5th warmest on record with conditions swinging to of record-level rainfall to near drought conditions, 2018 is set to exhibit similarly extreme weather patterns, according to Niwa’s Seasonal Climate Outlook.

“If further warnings were needed that we cannot be complacent, the fact that New Zealand’s insurance bill for extreme weather events – at $242 million in the first seven months of last year was five times higher than the bill for 2016 – sends that clear warning,” said Mr Shaw.