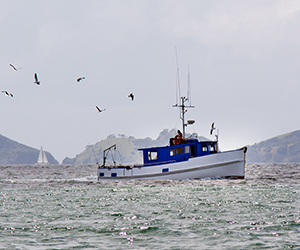 The Nelson District Court has imposed a $16,000 fine on a commercial fisherman for taking marine life for commercial purposes from Kahurangi Marine Reserve.

The $16,000 fine imposed by Judge Ruth is the largest fine given for commercial fishing in a marine reserve and the judge said commercial fishers need to ensure they fish in appropriate areas.

DOC Buller Operations Manager Bob Dickson said people fishing have a responsibility to ensure they know where marine reserves are and their boundaries.

Commercial fishing in a marine reserve has penalties of a fine of up to $250,000 or up to three months’ imprisonment or both. Equipment used in the offending, including vessels, can be forfeited.

Kahurangi Marine Reserve covers approximately 84 square kms and is one of New Zealand’s largest marine reserves. It protects 16 km of coastline out to 5 km offshore. It borders Kahurangi National Park and the Heaphy Track Great Walk.