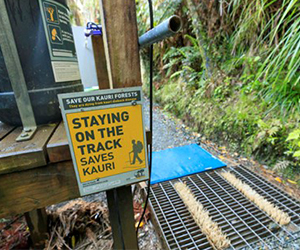 Auckland Council’s Environment and Community Committee met on Tuesday 5 December to decide what measures the council would take to prevent the spread of the kauri dieback disease in the Waitakere Ranges Regional Park.

Despite repeated warnings that Kauri could be wiped out in 20 years by the pathogen Phytophthora agathidicida, known to be spread by people, the council has decided this to keep the ranges open to the public, closing 13 tracks in the infected areas. A network of track closures commenced immediately.

In August an Auckland Council report said the rate of kauri dieback in the ranges more than doubled in five years from 8 percent to 19 percent. Last week, Local iwi Te Kawerau a Maki placed a rāhui, or customary prohibition, on entry to the Waitākere Ranges Regional Park (WRRP). They say that the only hope for Kauri survival is to keep people out.

Forest & Bird urged Auckland Council to support the rāhui and impose a total closure of the Waitakere Ranges Regional Park, and has also called for a national response to the problem, saying that Councils shouldn’t have to shoulder the problem alone.

“The closure would be temporary until upgrades are made and the quicker this can happen, the quicker parts of the park can re-open; but without them, we’ll lose kauri in the Waitakere ranges forever,” said Forest & Bird’s Auckland Manager, Nick Beveridge.

“These upgrades should not just be the responsibility of Auckland Council. This should be a national multi-agency response from the government with the resources to back it up”, he added.

Mr Beveridge notes that Kauri is a keystone species in the Waitakere Ranges, and in all kauri forests, and if they die many other species will also disappear.