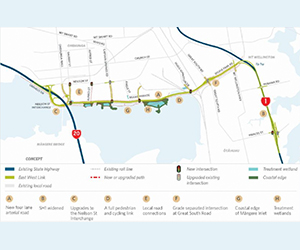 The independent Board of Inquiry appointed to consider the East West Link has released its draft decision approving the NZTA’s proposal to construct a new four-lane arterial road connecting State Highway 20 (SH20) at the Neilson Street Interchange in Onehunga with State Highway 1 (SH1) in Mt Wellington.

In addition to the proposed highway, the proposal includes new local road connections within the Onehunga and Penrose areas and new, or upgraded, cycle and pedestrian facilities.

The Board of Inquiry’s draft decision gives the New Zealand Transport Agency legal approval, in principle, for the construction work and the right to use land for this purpose.

The Minister for the Environment, the Minister of Conservation, the New Zealand Transport Agency, Auckland Council, submitters, landowners, and occupiers affected by the decision, now have 20 working days to provide minor or technical comments on the draft decision document.

The final version will be released January 2018.