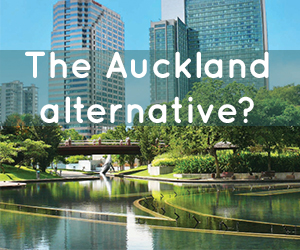 A new report by Infrastructure NZ suggests that a city of 100,000 inside a 2000ha footprint could be the answer to Auckland’s housing crisis.

The report, Meeting Auckland’s Growth Challenge: The Innovation City, found that Auckland’s south provides the greatest availability of land, with Paerata proving to be the obvious and most cost effective location for a satellite city, from a water, energy and telecoms delivery perspective.

The proposed ‘Innovation City’ is comparably dense by Australasian standards (approximately two times more persons per hectare than metropolitan Auckland today and twice as dense as existing growth plans for Dairy Flat- Silverdale), but would support existing council policy to limit urban expansion, say the report’s authors. They note that a single major urban development in a green field location would best satisfy the need for more homes, quickly, affordably and consistently with transport services.

The proposed city would be linked to the CBD by non-stop rail services. To achieve this, KiwiRail advised that four-tracking would be required, which presents the added benefit of separating rail freight and commuter services. KiwiRail estimates the cost of four-tracking between Papakura and Westfield at around $1.5 billion (including work like a third trunk line Westfield to Wiri, which the authors say may proceed sooner).

“By focusing growth in a single, albeit large, undeveloped site, Auckland could sequence, target and align development and infrastructure”, say the authors. They argue that raw land values could most easily be leveraged to align infrastructure costs with benefits and enable housing to be delivered at uninflated costs. The absence of major established communities would facilitate rapid delivery of both infrastructure and development and would be most feasible from a political and social perspective.