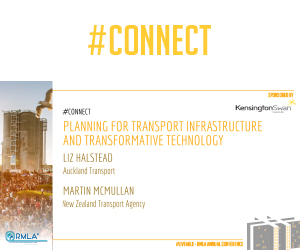 Martin McMullan, NZTA and Liz Halsted, AT, will discuss the future of the mobility market and how changes in technology are affecting transport infrastructure in Auckland and New Zealand, from the introduction to network wide mobility apps, to future proofing corridors to flying shuttles.

Liz Halsted Policy, Plans and Sustainability Manager, Auckland Transport Liz has worked in NZ, Australia and the UK in integrated transport strategy, technology, sustainability and demand management over the last 16 years. Liz currently develops policy and strategy for Auckland Transport including looking at emerging technology policy and the role it plays in Auckland’s integrated transport system and balancing movement and place. She returned to NZ in 2014 after working for 11 years in London at Camden Council and Transport for London (TfL).