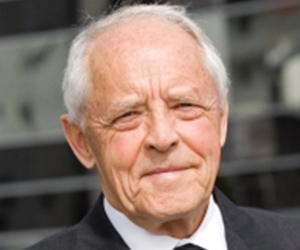 The award was made on the basis of his significant contribution to the resource management profession over his lifetime. As a recent past Present, Martin Williams, said in a letter supporting the nomination, Peter Salmon is “the very type and pedigree of potential recipient the National Committee had in mind when this unique and prestigious award was conceived.”

“Peter was admitted as a barrister and solicitor in 1959 and was a partner in Nicholson Gribben from 1961 until 1974. That firm was well-known in Auckland and had a large practice in local government and planning law, an area where Peter quickly became recognised for his expertise.

He went to the independent bar as a barrister in 1974, becoming a Queen’s Counsel in 1983 and continued to practise as a senior counsel right up until 1996 when he was appointed a High Court Judge.

During his 35 years as a partner, barrister and Queen’s Counsel, Peter was widely regarded as the leader of what was often called the “planning bar.” He was highly regarded by local authorities and industry, along with community and environmental groups and had a wide- ranging practice. There would have hardly been a major case before the Planning Tribunal or Environment Court during that period when Peter was not involved as counsel for one of the parties.

In what might be described as a fitting finale, one of the most significant projects he was involved in late in his career as Queen’s Counsel was the casino licence application to establish Auckland’s first casino. There were several competing proposals and Peter along with Principal Environment Judge (as he now is) Laurie Newhook, who was then a partner of Brookfields, helped secure the licence for the SkyCity casino and its proposed Sky Tower. Twenty years later the Sky Tower still towers above Auckland in much the same way as Peter towered above other members of the planning bar at the time of the application.

Judge Newhook in his letter supporting the nomination described how he worked with, against and before Peter Salmon in his various capacities during something approaching 4 decades and said:

I wish to single out a few of Peter’s qualities in particular. First and foremost his remarkable clarity of thought and expression; an amazing ability to cut to the chase. I briefed him in a number of cases (Auckland’s Sky City Casino being the most notable, involving no fewer than 29 separate pieces of litigation in almost all the courts in the land). Peter’s ability to receive and rapidly assimilate great volumes of material from

the legal team and expert witnesses, and convert same into an extremely succinct and winning hand, was notable. I seem to recall him favouring the number 9. For instance 9 pages of submissions, and 9 incisive and highly effective questions in cross- examination for an unsuspecting expert witness. That sharp-as-a-rapier mind moved with him to the bench. Focussed hearings and exquisitely written judgments became the hallmark.”

Peter was appointed as a High Court Judge in 1996 and served on the High Court, and from time to time as a divisional member of the Court of Appeal, until his retirement from the bench in 2004.

In the nomination for an earlier award by the RMLA to Peter, it was noted that during his judicial career his contributions to the RMA jurisprudence included over 20 cases, among them important decisions on the permitted baseline and challenges to non-notification, that became leading decisions in the field.

Following his retirement from the New Zealand judiciary, he subsequently sat on the Pacific Islands Courts of Appeal, a role he has only recently completed after several years of distinguished service.

In addition to these roles Peter also served as Chair of two important inquiries.

The first was as Chair of the Board of Inquiry into the draft NPS on Electricity Reticulation under the RMA processes.

Peter was deservedly recognised for his contribution by the award of his CNZM.

Yet another area where Peter has contributed is in resource management related publications.

In particular, he is the Editor of Salmon Resource Management Act, the loose-leaf publication from Thompson Reuters, and he and Associate Professor David Grinlinton are the Editors of Environmental Law in New Zealand, also published by Thompson Reuters. Peter also served on the Advisory Board of the New Zealand Centre of Environmental Law at the Faculty of Law, Auckland University.

Lastly and by no means least, as is well-known, Peter was one of the RMLA’s founders. As the undoubted leader of the planning bar he was also invited to be the RMLA’s inaugural President, which role he served until appointed a Judge.

But Peter did not stop his ongoing interest and support for the RMLA when he resigned as President. He has contributed to many of the annual conferences as a speaker or panellist and has used his contacts and skills to help attract international key note speakers. He continues to attend various events held by the Association. This has continued to the present day, including at this year’s Auckland conference where Peter was part of a panel speaking about the future of the RMA.

His strong interest in advancing serious consideration of important environmental and resource management issues was recognised by the RMLA when it introduced the Annual Salmon Lecture. Peter has been a participant and a regular attender at these successful and thought-provoking events.

Fourteen years ago, in 2003, Peter’s contribution was recognised by an “Outstanding Person” award from the RMLA, but as just described, Peter has continued to contribute.

It is entirely appropriate therefore that on the 25th anniversary of the founding of the RMLA, one of its founders and our inaugural President be recognised for his lifetime’s contribution to the resource management profession by being awarded the Principal Environment Judge Bollard Lifetime Commemorative Award.”

RMLA warmly congratulates the Hon Peter Salmon CNZM QC on receiving this prestigious award and thanks him for his on-going contribution to and support of this Association.