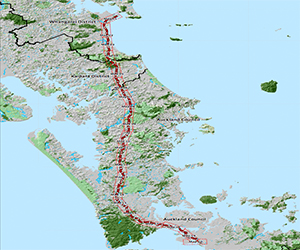 A rupture in the 170km Marsden to Wiri pipeline has had a major impact on New Zealand’s air transport this week, prompting calls for better resilience planning. The pipeline is the only source of jet fuel for Auckland Airport and the incident has raised questions over resilience planning and consenting processes for fuel storage.

A leak was detected in the single 10-inch wide pipe (250mm), eight kilometres south of the refinery at Ruakaka last Thursday. The pipeline carries diesel, petrol and jet fuel under farmland, towns and part of the Manukau Harbour to the Wiri Terminal in South Auckland. A small pipeline from Wiri is then used to supply Jet A1 product to Auckland International Airpor

“Asset owners need to be able to consent storage and protect assets from reverse sensitivity objections”, said Stephen Selwood, Chief Executive of Infrastructure New Zealand. “Resilience investment needs to be more strongly recognised in our planning and consenting frameworks so that regulatory barriers do not discourage industry from providing the backup New Zealand needs”, he added.

Energy and Resources Minister Judith Collins says the 70-80,000 litres that escaped into a farmer’s culvert since the leak was noticed last Thursday has been “largely recovered” and plans are underway to treat the soil.

Whangarei-based New Zealand Refining, which operates the country’s only oil refinery in Marsden Point, says the leak will hit revenue by as much as NZ$15 million.