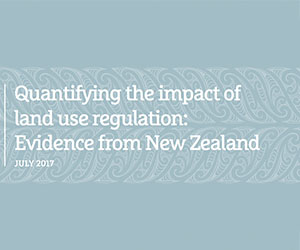 A report published yesterday suggests that land use regulation is responsible for up to 56 per cent of the cost of an average house in Auckland.

The report Quantifying the impact of land use regulations: Evidence from New Zealand was commissioned by the Social Policy Evaluation and Research Unit (Superu) in 2016.

The report’s findings include:

Finance Minister Steven Joyce said: “The results in the report are consistent with the findings of the recently released Productivity Commission report on Better Urban Planning and the National Policy Statement on Urban Development Capacity.”