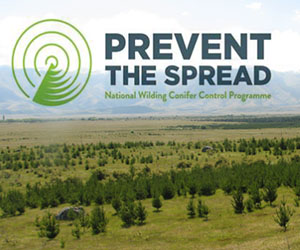 Five new areas, covering 371,000 hectares of affected land in Canterbury, Otago and Southland, have been prioritised in the battle to control the spread of wilding conifers. To support the expanded programme, Land Information New Zealand has developed the Wilding Conifer Information System, a web-based mapping and monitoring tool, to enhance control of the invasive plant species.

Wilding conifers present a major threat to New Zealand’s ecosystems, native landscapes and farms. Active management is required to tackle invasive conifers, which now affect more than two million hectares of land and are spreading at an estimated rate of five per cent a year.

The five new priority areas add to the 1 million-plus hectares of successful control delivered last year across 14 priority areas. To support the National Wilding Conifer Control Programme, LINZ has developed a Wilding Conifer Information System (WCIS), to provide accurate and nationally consistent standards to record data about infestations and control activities. The WCIS comes complete with a mobile app for authorities to download on their devices and capture information from the field in real-time, and will assist decision-makers in where to prioritise funding for control.

The National Wilding Conifer Control Programme is a partnership between LINZ, the Ministry for Primary Industries, the Department of Conservation, the New Zealand Defence Force, regional and district councils, forestry, farming and community groups.

The mapping App can be viewed on the LINZ website: www.linz.govt.nz/wilding-conifer-information-system

The five new Priority Areas include:

These three areas are a significant step towards tackling some of the most significant and well-known areas of wilding conifers in New Zealand. This work will protect iconic high country tourist landscapes, conservation values (such as kaki/black stilt habitat), farmland, recreational opportunities and water catchments for hydro-electricity and irrigation.

Lammermoor addresses spread at a relatively early stage across an extensive area of land that is highly vulnerable to invasion. This area contains significant conservation values and highly sensitive water catchments as well as large areas of vulnerable farmland.

Mid Dome will commence work to address a significant and high profile infestation and protect significant investment in the area. The national programme can realise significant efficiencies through the rapid removal of seeding trees, resulting in substantial savings in the longer term.