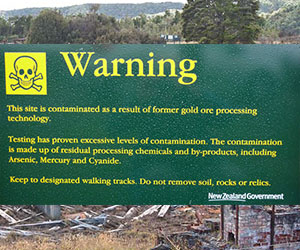 The Prohibition and Alexander mine sites on the West Coast have been successfully remediated, according to an announcement by Environment Minister Dr Nick Smith and Conservation Minister Maggie Barry on Wednesday. The sites were acutely contaminated; arsenic levels at the sites were among the highest recorded anywhere in the world at 400,000 parts per million on land, or 500 times the safe level, and in water at 300 parts per million, or 33,000 times the safe limit for drinking water.

The Prohibition mine site contamination resulted from the operation of a roasting plant from 1935 to 1951, when arsenic bearing ore was roasted to release gold. The sites also have high levels of mercury and cyanide. The mining company has long gone and DOC inherited the site in 1987.

The Alexander processing plant that produced the high levels of arsenic operated between 1934 and 1936. The mine closed in 1943.

The 18-month site remediation projects were jointly funded by the Department of Conservation (DOC) and the Ministry for the Environment’s Contaminated Sites Remediation Fund. The clean-up costs amounted to $3.6 million.

Minister Smith stated that future governments should “properly regulate mining activities today so as not to create more problems of this sort in the future”.