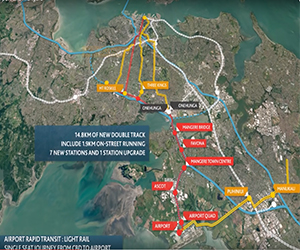 Work on route protection is to be progressed with “urgency” to future-proof options for both advanced bus and light rail, the Ministry for Transport has announced.

The announcement was made on the basis of the findings of a study, which sets out plans for a staged, integrated transition to light rail along the preferred ‘Airport to City’ route, based on future demand and capacity over the next 30 years. The transition will be made possible via an initial ‘advanced’ bus route through a separated corridor.

NZ Transport Agency and Auckland Transport commissioned the study in response to the findings of the Auckland Transport Alignment Project, which identified the future pressure on mass transit corridors and the need for route protection to ensure future economic growth and productivity.

The plan will be put into action imminently, according to the Minister for Transport, Simon Bridges. “Route protection will now begin to provide a mass transit corridor between the airport and Auckland city,” he said.

He added: “This is a significant step for Auckland and will secure better transport options for both Aucklanders and visitors to the city.”