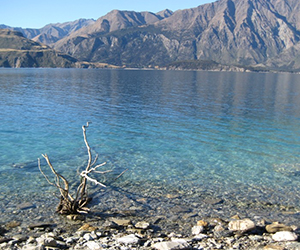 The station, recently sold to US broadcaster Matt Lauer, spans Lake Hawea shore, the recreationally valuable Hunter River, and large tracts of Department of Conservation land in the head of the Hunter Valley. Fish and Game said they had expected a secure legal easement, particularly in light of the buyer’s willingness to allow better access.

“The applicant showed considerable good will in consulting extensively with stakeholders prior to the application and it is surprising to find so little of that input has translated into secure public access conditions in the  Overseas Investment Office’s approval”, said Otago Fish and Game Council Chief Executive, Neil Watson.

Mr Watson described the Overseas Investment Office’s (OIO) decision as “extraordinary given the volume of information on public access needs which was provided by environment and recreation groups”. He said the key issue of public access through the station to the Hunter River and conservation land beyond has been inadequately addressed and offers no improvement on the status quo.

“[OIO’s] decision only managed to offer resolution of one longstanding roading issue – access to Kidds Bush from the state highway – and a walking access easement to a local high point”, he said.

Federated Mountain Club President Peter Wilson also noted dissatisfaction with the outcome. “FMC Clubs wants Mr Lauer to know that the New Zealand outdoors community is not happy with the public access provisions approved by the Overseas Investment Office. Only two out of nine recommendations put forward by the respected government agency, the Walking Access Commission, have been adopted”, he said.

FMC’s bottom line was a walkway easement, managed by the Department of Conservation, along the existing formed road through Hunter Valley Station to the public conservation land at the head of Lake Hāwea and beyond. The easement would provide for all forms of public access as appropriate, according to a public statement.

Fish & Game’s Watson warned that the sale terms set out by the OIO in this latest land transaction could result in public resources such as trout fisheries being captured by private interests.  “This trend is impacting on traditional public use throughout the South Island high country and it needs to be counterbalanced by Government through available mechanisms – primarily the OIO properly scrutinising applications to purchase a slice of our high country.”

The Commissioner of Crown Lands has yet to approve the transfer of the station’s pastoral lease, and Fish & Game and FMC have indicated that they are hoping for further engagement on the question of public access.