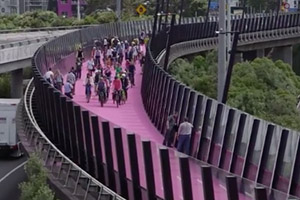 Cyclists are today celebrating the one-year anniversary of Auckland’s iconic Lightpath Cycleway. In its first year, the Lightpath has hosted more than 200,000 trips – that’s approximately 562 cycle trips and 318 pedestrian trips each day. These figures illustrate the degree of popularity and the impact cycling is having in the city.

“[The figures show] that if you build quality, safe infrastructure for active modes of transport, there are many people who are keen to use it,” said Transport Minster Simon Bridges.

The $18 million cycleway was officially opened a year ago, transforming cycling infrastructure in the city centre. It provides a vital link in the Auckland Cycle Network, from Upper Queen Street to Victoria Street and connects directly to the Northwestern and Grafton Gully cycleways.

The design converted the disused Nelson Street off ramp into a walking path and cycleway, easily recognised by its distinctive magenta-coloured asphalt. Recently the Lightpath received international recognition, by winning the Transport Category, Completed Buildings at the World Architectural Festival in Berlin.

The cycleway was delivered through a partnership between the Government and Auckland Council as part of a $200 million programme of cycle improvements in Auckland over three years. The Quay Street Cycleway has also been completed as part of this.

Through the Urban Cycleways Programme central and local government are working together to deliver $333 million worth of new cycleway projects throughout the country over the next three years – the single biggest investment in cycling in New Zealand’s history, according to Mr Bridges.