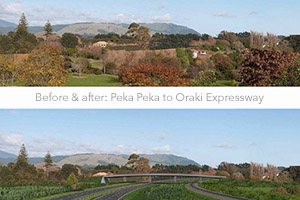 The NZ Transport Agency announced Wednesday that it awarded the $330 million contract for construction of the Peka Peka to Ōtaki Expressway to Fletcher Construction.

The Expressway will be a 13km, four-lane highway that runs along the existing State Highway One route from Peka Peka Road to Te Horo, and an eastern bypass of Ōtaki. Major construction will begin in mid-2017.

It forms part of Wellington Northern Corridor, one of the Government’s Roads of National Significance, which runs between Levin and Wellington Airport, and is expected to open to traffic in 2020.

More information is available at www.nzta.govt.nz/peka-peka-to-otaki-expressway/.