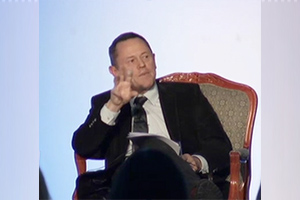 Under the Kyoto protocol, the assumption was that GHGs were tradable with one another. But this did not address the issue of long-term cumulative gases and short-lived gases, which is precisely where fresh thinking is needed, noted Simon Upton in an address to RMLA delegates in Nelson last month.

“Some researchers now argue that it is better to have two ‘baskets’ of gases to manage the trade-off between long-lived accumulating gases like CO₂ and nitrous oxide … and shorter-lived gases – like methane – for which we need to establish a sustainable on-going rate of emissions”.

In this scenario, there is no place for pine forests as carbon offsets.

“Compared with the amount of carbon NZ has released and our business as usual emissions, the potential to store more carbon is rather small.  If there was ever a short-term case to offset a permanent increase in atmospheric carbon with forest sinks (whose permanence cannot be guaranteed) it has long since vanished”, he said.

To manage its emissions, New Zealand needs to deploy the right tools to deliver the desired outcome. The ETS has a big role to play in tackling carbon emissions from energy generation and transport, said Upton.

But for other gases, such as nitrous oxide and methane, different tools are needed. He suggests a tax, or mandatory changes in pastoral farming management practices to set these emissions on a steadily downward path.

Time is running out. Current estimates give us until 2035 before our carbon budget expires, which means that “getting on with the job is more important than designing the perfect policy instrument”, said Upton.

It also means that every player needs to step up to the plate.

“Industrial agriculture, as we practice it in countries like New Zealand, cannot exempt itself from its share of responsibility for climate change”, he said. “Either a clear date is set to include agricultural emissions in the NZ ETS, or alternative pricing and regulatory measures need to be developed.  In the wake of Paris further deferral of action is not an option.”

To view the full slide presentation and notes: 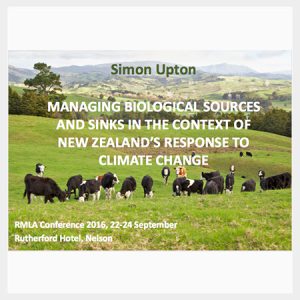