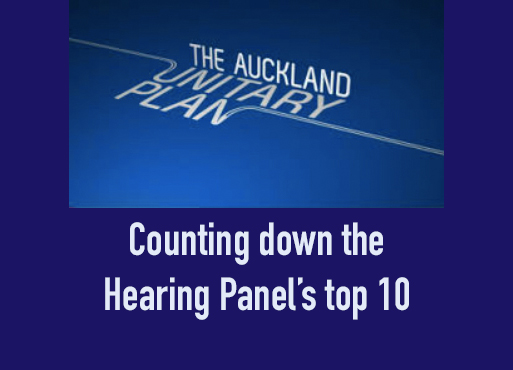 The Unitary Plan – Counting down the Hearing Panel’s top 10

At the time of writing, the Council is currently considering whether to accept or reject the Panel’s recommendations. Whether significant aspects end up in the Environment Court or High Court remains to be seen.

The Panel’s recommendations are comprehensive, including approximately 60 decision reports. One article cannot do justice to the full range of issues raised through the process. This article therefore takes a highlights approach and counts down the Panel’s “Top 10” recommendations.

The first is that it could be critical in terms of appeal rights. The bespoke statutory framework within which the Unitary Plan is being developed contains limited appeal rights. Rights of appeal to the Environment Court are limited to matters where the Council:

• rejects the Panel’s recommendations (this appeal right is limited to a person whose submission addressed the relevant provision or matter to which the recommendation that Council rejected related).

Where the Council accepts the Panel’s recommendations, appeals can only be made on a point of law. These appeals are made to the High Court.

The second is that it became a hot topic earlier this year when the Council proposed what it considered to be out of scope changes to the zoning of vast tracts of suburban land, and then following a public backlash sought to withdraw that evidence following Councillor intervention.