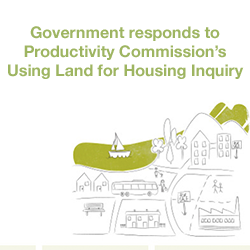 The government has released its response to the Productivity Commission’s report, Using Land for Housing.

The Government has said that it agrees with and will act on almost all recommendations, noting that recommendations are already being addressed through the Resource Legislation Amendment Bill, the Urban Development Capacity National Policy Statement (NPS), the Better Local Services reforms, Crown-led development projects, the Housing Infrastructure Fund, and Urban Development legislation.

Notably, the government registers its agreement with the Commission’s finding that “specific rules and aspects of plans appear to impose unnecessary constraints on development capacity”. The Commission notes that the opportunity cost of foregone development, in terms of higher housing costs, often outweighs the benefit of minimising environmental impacts and existing amenity impacts. Supporting this finding, the government refers to its Urban Development Capacity NPS which, it says, aims to ensure such opportunity costs are reflected in decision making.

The government also notes that it is considering a sunset-clause for restrictive covenants allowing changes by super-majority. It says it is also working with the Overseas Investment Office to identify process improvements to reduce the cost and time associated with approvals for foreign owned developers wanting to build houses in New Zealand.

Key components of the government’s response include:

Click here to read the Government’s full response to the Using Land for Housing Report.